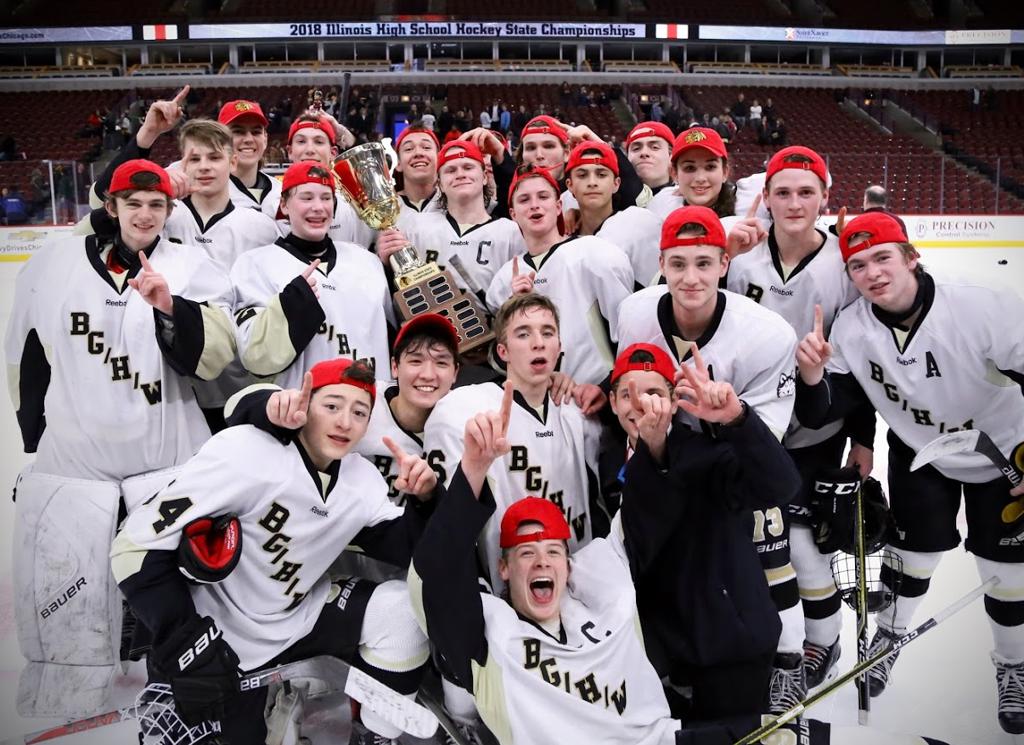 Junior Brendan Buckley had one of those games Saturday night at the United Center he said he "never would have imagined."

He scored 4 consecutive goals, all assisted by senior Conner Kelly, in leading Buffalo Grove/Hersey/Wheeling to a convincing 7-2 win over the co-op Waubonsie Valley team for the Illinois high school Combined Division state championship. It's the second title in three seasons for BG/H/W.

"I got a lot of opportunities, a lot of tap-in goals. It just worked out for me," said Buckley, who lives in Arlington Heights and attends Hersey.

He hadn't scored more than 2 goals in a single game this season.

"My linemates set me up really well today … and I had a hot stick. It's an amazing feeling; it's crazy, I can't even put this feeling into words."

Buckley was a house league player growing up, skating for the Glenview Grizzlies. Last season, he was the team's Most Improved Player. And now he's the MVP of the state championship game.

"(Buckley) went (last season) from being a third- or fourth-line player to a first-line player due to effort. This year, he really matured," said BG/H/W coach Bob Wagner. "Buckley is a great kid, never complains, deserves the accolades."

Kelly, who scored the Stampede's first goal at 9:38 of the first period, assisted by Buckley, said, "I tell everyone how under-appreciated (Buckley) is."

Kelly (Buffalo Grove) was the team's leading scorer this season, finishing with 74 goals and 48 assists in 74 games. 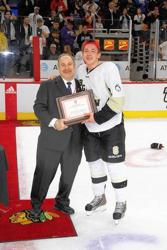 "I think the kids played great and I'm really proud of them," said Wagner, who announced his retirement after the game, ending a 16-year run on the BG/H/W bench. He will remain the president of the North-Central League. "To win state in my last game … it doesn't get much better than that."

Wagner, who lives in Hawthorn Woods, coached about 800 games in his career.

"I'm so proud of this team … this was a fun game," Kelly said. "Everyone played great, from the first line to the fourth line, and the defense, and our goalie had another fantastic game.

"We wanted to end the season on the right note, and we did."

This was Kelly's second season on BG/H/W. He previously skated for the Northwest Chargers club team, but after BG/H/W won state two years ago, "that's when I said, 'I'm going to (play for) BG/H/W; I too want to win state at the UC.' "

Kelly wasn't at the team's title victory game two years ago, but admitted, "I've watched it more times on YouTube than I can count."

BG/H/W led 1-0 after the first 15-minute period, but built a 5-1 edge after the second period, aided by an unassisted goal from junior Eric Kurpieski.

"We were very excited about being here, but just came out flat and couldn't get our jump back," said Waubonsie Valley coach Jimmy Frasco. "We tried to change things up, but just couldn't get the flow going that we used to get here. They really deserved it today."

No one scored a hat trick against Waubonsie this season, let alone four.

"He was in the right spot at the right time and he's a good player," Frasco said. "It's very heartbreaking. Today just wasn't our day. Nonetheless, I'm very happy with what these kids did accomplish this year."

"We fell apart in the second period," said Wilder, who lives in Naperville, attends Waubonsie Valley and is in his first season on varsity. "They pushed us hard and we just couldn't keep up."

Senior Zac Lyons (Waubonsie Valley) cut the score to 5-2 on an unassisted rebound goal at 13:07 of the third period.

"It just wasn't our night," Lyons said. "No one thought we would have come this far. I don't think we were really focused, or maybe we just lost focus tonight. And that hurt us."